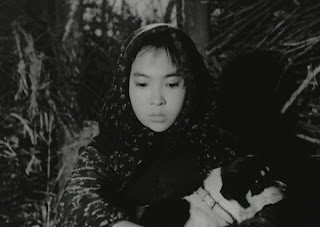 The very first shot: a lamb, alone on the wide meadows, bleating, almost childlike. Much later in the film, the main protagonist, an orphan girl (later superstar Josephine Siao in a very early role), is saved in a cold winter night by a jacket, given to her by the old travelling street artist, who has become something like a father for her. However, the jacket ist clearly made from sheep wool. So in a way, the lamb from the first shot (never to be seen in between) has returned in a crucial moment.

Nobody's Child is a low profile melodrama from a prolific and largely forgotten time of the Hong Kong film industry. There were probably hundreds, if not thousands of small scale films like this made around 1960, before the big budget Shawscope extravaganzas began to dominate the field. Thousands like it, but not a single one exactly like it. Nobody's Child has a fairytale-like, but somehow underdeveloped plot, routinely permuted into a film both naive and touching (the girl, looking in horror in the background through a window, realizing that she is about to be sold away) - and just a little bit weird: The storyline is strangly mirrored, if not displaced entirely, by the animal world - starting with the very first shot of the lamb.


The orphan, living with a good foster mother and a limping and therefore bad foster father (there are no really bad people in this film, only bad animals: wolfs, roaming the white, innocent snow), escapes being sold for the first time, because a cow is sold instead of her - a strange shot of the cow's behind being moved out of the cage. Later, the orphan doesn’t get eaten by wolfs, but two show dogs do, and she doesn't die in the cold, but a show monkey does instead (after suffering bitterly and being treted by a doctor who's pretty irritated about the taking over of the animal world), and when the travelling artist finally also has to give in, not the girl, but only his third dog stands guard at his grave. Sometimes, the animals are just in the way of the humans, insist on taking a few seconds of screentime away for themselves, as when the street artist collides with another man on the streets, setting loose a group of ducks which escape cheerfully from their sorry fates. In the end, the girl moves on, together with the third dog, away from the camera, towards an uncertain future - she holds the dog on a leash, but who is she kidding: she'll go wherever the animals might lead her.
Gepostet von Lukas Foerster unter 8:12 PM