(This is my first english language posting on Dirty Laundry and my first serious try at writing in english on film. I'm not a native speaker, much less a native writer. Please bear with me.) 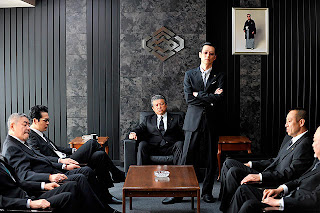 After visiting Japan for the first time and spending ten days in Tokyo, mostly in its busy but not quite hectic streets, I arrived in Hong Honk yesterday evening - also for the first time. And after taking a first, tentative walk through its not quite as busy but a lot more hectic streets, I started my festival with Takeshi Kitano's Outrage: Beyond (a film shot in 35mm; unfortunately, the screening copy was as a badly transferred dcp). That is, with a return to the mean streets of Tokyo. And while immediately recognizing / reremembering some parts of the city's fabric - for example frosted glass windows, which embody for me af decidedly japanese notion of semi-privacy; the pachinko-parlour, in which one of the film's most stylized scenes is set; also those surprisingly big cars that roam the narrow streets; these narrow, meandering streets themselves - I was much more taken by the restrains and abstractions Kitano's own style imposes on the city. Of course, every film stylizes space - and maybe in gangster films this stylization is always more obvious than in other genres. But Kitano's film is a rather extreme case (compared to, say, Miike's buzzling takes on the Yakuza genre or to Kiyoshi Kurosawa's structuralist dtv-pieces; not to speak of the fullness of experience Fukasaku's masterpieces made palpable).

The iconic cityscape itself is all but absent from the film - only in the the very first scene Kitano allows himself some long shots of the harbour area. Later the film plays out like intimate theater - even in the scenes that are set outside. Outrage Beyond is set in an extremely controlled, almost tomb-like space, which perfectly (maybe: sometimes too perfectly) corresponds with its storyline about selfcontained male violence. There are only three short scenes in the whole film involving women, and in one of them, the very first one at the harbour, the woman is both already dead and invisible. The rest is post-heroic masculinist genre mechanics in restricted spaces with a somewhat ritualistic feel to them. But for the most times, there are no rituals being performed any more. And even if they are, they look more like parodies gone wrong than like the real thing.

Outrage Beyond isn't very inspiring as a whole, or as a classical genre piece, the main storyline about Otomo's reluctant revenge on his old foes just doesn't make much sense, psychologically (or even: anti-psychologically), the actions of his opponents don't make much sense, period; other characters, especially the two cops and some young thugs who terrorize some workers on a baseball batting cage (in one of the most interesting, but unfortunately also most atypical scenes of the film), have some great scenes but are all but wasted when the higher Yakuza ranks take over the action. However, as auteur cinema Outrage Beyond is great, greater than the comparatively showy first part and maybe even greater than Kitano's art films from the Nineties.If only because of Kitano's great sense of detail. Details of space, like the short establishing shots, often not at the beginning of the scene, but inserted in the middle of a conversation. And details of movement through (off-screen-)space, like in a magnificent scene set in and especially outside of an elevator, which makes particularly great use of Keiichi Suzukis fantastic score (a slow burning blues gitar combined with some electronic gadgetry).
Gepostet von Lukas Foerster unter 6:00 AM