Yang Tian-yi made only documentaries in the past. At the beginning of Longing for the Rain, her first fictional feature film, she announces the limit of the documentary in a self-conscious, somewhat aggressive, but still playful way. The very first images are interview-style statements of everyday chinese women talking about everyday chinese problems, most having to do with money. Then a harsh cut, the documentary setting vanishes, the space becomes fictionalized, liquid, another woman enters the scene. Her story - the rest of the film - feels like a countershot to the first short segment. Obviously, this new woman is rather well off and her problems aren't of the everyday kind.

The first real discovery of the festival. A film about a chinese upperclass woman who has vivid and plaesureful sex-dreams about a ghost. A somewhat trashy premise... And the great thing is, the film isn't afraid of the lure of trashiness. On the contrary, it gives in, like its protagonist, to pleasure. Yang Tian-yi and her cameraman obviously had a lot of fun shooting the stylized sex scenes (every single one plays out in a decidedly different way, but all are in sharp contrast to the much rougher looking non-sex scenes), even a joint shower with the grandmother can turn into some kind of erotic play, other sequences are set to high-flying classical music. But pleasure is never constant, always fleeting. The images - never in danger of crystallizing into static beauty - move along in frantic pace, a busy film in a busy world, but not in a Soderberghian-trancelike-everything's-connected-and-look-how-beautiful-digital-cinema-can-be-when-you're-only-interested-in-surfaces-way. The world of the film is fleeting, but not ever-fleeting, but instead made up of a series of discrete shocks. Desire doesn't get lost along the way, but it changes shapes and objects, like when the protagonist and her female frien visit different priests of different religions, maybe to get rid of the ghost, maybe to come closer to him. They just don't know beforehand.

Odd twists and turns lurk behind every corner. When the husband leaves his ghost-ridden wife and takes their daughter with him, all seems to be set for a turn into proper festival cinema territory. However, the film doesn't behave after all, the ghost lover insists on staying, the religious ceremonies become weirder and more insisting (one detail among many others: a somewhat delirious woman smoking and chanting at the same time), the protagonist's always inquisitive, whimsical gaze gets ever more capricious, seeking the body of the monk instead of transcendence. 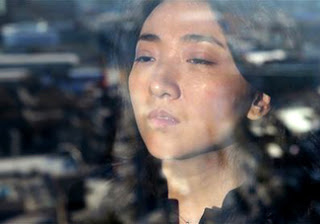