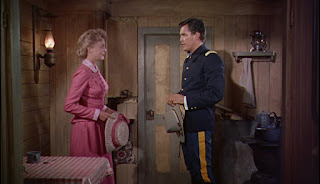 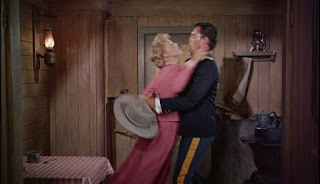 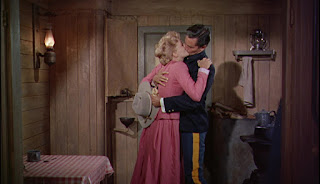 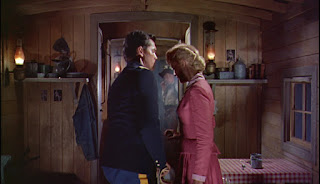 When you watch the parade passing by you can't be part of it yourself. Not only a film about a life almost completely lived by proxy and the growing invisibility of history (in the age of cinemascope), but also about the specific melancholy of cinema.

Also: Maureen O'Hara as the last great silent movie comedian. Her love on first sight scene with Tyrone Powers might be one of the most beautiful slapstick routines ever.
Gepostet von Lukas Foerster unter 10:20 AM No comments:

My favorite part comes when, towards the end of the film, shortly before he arrives in this film's version of Jerusalem, John Wayne stumbles through a canyon, thirsty and depleted. As in other scenes before, exhaustion is treated not as a bodily condition but as a prerequistion for the state of grace. Wayne, however, doesn't fall into a soft, cloud-like death, but instead becomes something like a mad saint, he starts hallucinating, and the world around him transforms itself into a cinematic echo chamber, complete with ghost voices, superimpositions, and a donkey miracle. In a way, the whole film works like this: While Ford's other westerns of the period (probably even the intimate Wagon Master, which I'll have to revisit soon) are deeply invested in making sense of the emerging post war world, 3 Godfathers often feels like a private fantasy: John Ford, hanging out in his own cinematic echo chamber.

Of course this isn't a surprise, given that 3 Godfathers is a remake of Ford's own 1919 film Marked Men and also a tribute to its star, Harry Carey. The true miracle is that, despite its openly, even proudly anachronistic setup, the film never once feels claustrophobic. One reason for this might be, that the two main structural levels of the film - the genre exercise and the religious allegory - never completely collapse into each other. No matter how deliriously christian things get, Ford at the same time always stays true to the simple chase narrative which twice in the film is sketched as a spatialized diagram. Thereby, 3 Godfathers permanently sidesteps the notion of mythical closure which always seems to lurk behind the next corner.

More important, probably, are single scenes, evelated shots which seem to come out of nowhere (the one with Wayne shielding his dying friend from the sun), singular intensities. This, more than the naive storyline, connects the film to early cinema, to the cinema of attractions. Of course, every single one of these moments is also a triumph of craft. The sandstorm, for example, is a triumph of Hollywood studio artifice, on par with the storm in The Hurricane. But the best special effect is much more basic: the baby itself, the faux christ found in the desert, and fed with cactus water. Each time the bundle in which the infant is wrapped in is opened, the film seems to discover the wonders of life anew, as if for the first time. Here, in the spiritual center of the film, glorious artifice suddenly breaks through into pure realism: The tiny hands grabbing Wayne's tanned, life-worn fingers, the mouth sucking, by way of pure reflex, on the improvised milk bottle.
Gepostet von Lukas Foerster unter 11:38 AM No comments: